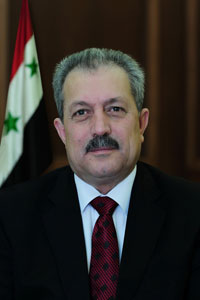 Eng. Hussein Arnous, the prime minister designated, in addition to his missions, is Minister of Water Resources.

He was born in Idleb province,1953, He graduated from Faculty of Civil Engineering of Aleppo University in 1978 and he was head of Idleb Engineering Syndicate branch from 1989 to1994.

A member in the central command of the al- Baath Arab Socialist Party since 2013 and Minister of Water Resources since 2018. 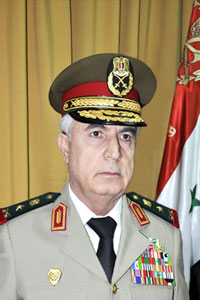 General Ali Abdullah Ayoub was born in Lattakia in 1952.

Ayoub occupied several positions in military leadership , the latest of which was Chief of the General Staff of the Army and Armed Forces since 21/7/2012. -Studied at official schools between 1948 and 1960 and got the high school certificate.

-Studied at Cairo University and graduated in 1963 with Bachelor’s Degree in Economy.

-Joined the Foreign and Expatriates Ministry in 1964 and served at the diplomatic missions in Tanzania, Saudi Arabia, Spain and England.

– Director of the Documentation and Translation Directorate at the Foreign Ministry (1980-1984). -Graduated from Damascus University, Faculty of Economy and Trade.

-Holds a PhD in Islamic Studies from Damascus University.

-Director of Religious Endowments Department in Tartous and Mufti of Tartous (1985-2002).

-Minister of Religious Endowments since 2007.

-Participated in many Islamic conferences.

-Earned a diploma in International Relations from the Institute of Public Administration, Paris. -Held a diplomatic position at the Foreign Ministry in 1994.

-Worked at the Syrian Embassy in Washington as US Congress affairs and Cultural Affairs officer (1995-2000).

-Occupied the post of General Secretary of Presidency in 2008.

-Minister of Presidential Affairs since 2009. – Held numerous military posts, the last of which is Head of the Political Security Department. Member in the Syrian Journalists’ Union since 1992,

Lecturer at the Faculty of Information.

He became Director of al-Ikhbariya TV in 2011.

General Director of the General Establishment Radio &Television since 2016. He was born in Damascus in 1958. He  is a scholarship and professor of general health and sub-tropical science from Germany, he holds two doctoral degrees from Leipzig and from Georg August Göttingen in  Germany.

He has been an accredited expert at the Athens World Health Organization (who) Center for Health and Environmental Science Education for more than a quarter of a century.

He has occupied many scientific positions as a head of section, vice –dean and a dean of college.

He runs many international Syrian projects and in 2015 he became a Director of the National Center for Educational Curriculum Development and remained until 2019 and was named in 2019 as Assistant Secretary of Education. He was born in Quneitra in 1965, He graduated from faculty of Law in Damascus University in 1994.

He served as the first investigating judge and then Judge of financial investigation and a public lawyer in Damascus countryside and first Attorney General in Damascus and a consultant for the Court of Cassation.

Minister of Public Works and Housing – Got a Bachelor’s Degree in Civil Engineering from Damascus University.

– Held several administrative positions such as Director Genera of the General Establishment for Housing. Minister of Agriculture and Agrarian Reform

He was born in Damascus. He graduated from Agricultural Engineering University in 1982. – Got a Bachelor’s Degree in Civil Engineering from Aleppo University. -Supervised organizational structures and statutes of a number of ministries. He was born in Damascus in 1971, he graduated from Faculty of Medicine from Damascus University in 1998 and continued his specialization in Otolaryngology, head and neck surgery in al-Mouwasat University Hospital until 2002.

He was a member of the American Academy of ear, nose and throat disease “Otorhinolaryngology ” in 2003

He was a founding member of the Arab Association of Otorhinolaryngology doctors in Cairo.

He was a member of the Syrian Board and Chairman of the Training Committee for otorhinolaryngology diseases since 2017.

He was elected as the head of the Syrian Association of Otorhinolaryngology doctors from 2014 to 2019 and the head of Damascus Doctors Syndicate in 2019.

He was a specialist supervisor doctor at al-Mouwasat University Hospital, He has been training postgraduate students and has been giving clinical lessons to human medicine students since 2003 She was born in Quneitra in 1953, she graduated from medicine faculty in 1979.

She was specialized in obstetric sciences in 1984.

She has a PhD in Women’s Medicine and is a member of a central committee to Arab Socialist Union Party.

In 2016, she was appointed as State Minister for the organizations’ affairs in the previous government. He was born in Homs in 1965, He has a PhD in Civil Engineering, specialized in Engineering and Water Resources Management in 2013.

He shared Preparing studies of several projects in the Orontes basin.

He was an assistant director of Homs department of the Orontes basin, as well as the head of Planning and Studies. He was born in Aleppo in 1960. He graduated from faculty of applied Chemistry from the Faculty of Science of Aleppo University in 1986.

General Manager of the General Industrial Company for Vegetable Oils in Aleppo between 2004 and 2013.

Member of the Board of Directors of Aleppo Industry Chamber between 2005 and 2010.

He studied administrative information at the National Defense College. Minister of Economy and Foreign Trade

-Assistant Minister of Economy and Foreign Trade since 2015.

-Director General of the the General Establishment for Exhibitions and International Markets.

-Was member of the teaching staff at the University of Damascus. – Earned a PhD in Civil Engineering from Moscow State University.

-Earned a degree in civil engineering from Tishreen University in 1987. He was born in Safita in 1969 . He has got a degree in petroleum engineering from al-Ba’ath University in 1993.

He started work in the Syrian Oil Company, Al-Gebsa Fields Directorate in 1993 and he was an engineer in the Central region gas project from 1993 to 1995.

Head of the Gas Collection and Processing Department of the Syrian Gas Company from 2003 to 2005.

He was appointed as Director of Service Contracts of the General Petroleum Corporation from 18-11-2018. Earnrd a PHD in General linguistics in 1986 from Paris 8th University in France with an honor degree.

A professor in Faculty of Arts and Human Science in Damascus from 2005 to 2016.

A member of the Academy of the Arabic Language in Damascus.

Dean of the Higher institute of Language. Minister of Culture from 2012 to 2014

A member of the board of Trustees of the Excellent Creativity commission since 2019.

An Advisor for cultural development Strategies at the Syrian Trust for Development.

She was awarded the state Appreciation award for the year 2019 in the fields of criticism, Studies and Translation. He was born in Lattakia in 1963, he has got a civil engineering diploma from Form Russian Federation “Soviet Union” in 1987.

Executive Engineer at the General establishment for drinking Water and sanitation in Lattakia since 1987.

Branch Director and central director at the General Land Reclamation Company in Aleppo since 1996 and assistant general director of the military Housing Establishment since 2008. He was born in Damascus in 1963. A professor in electrical engineering from Damascus University in 1993. He was born in Salmiya, in Hama countryside in 1976.

He has worked for the Central Bank of Syria from 2006 to 2015, where he has been appointed as Director of Department of Treasury and Director of Directorate of Banking Operations and Head of State Securities Management and Deputy Executive Chairman of Damascus Securities Market since 2015.

He was a Professor at Finance of the Arab Private University and has worked as an economic consultant to many international organizations.

He has many scientific studies and researches on financial markets and banking and financial issues.

He got married with two children. He was born in Hama in 1963. He had a degree in the Economy /Diploma in Business Administration / form Damascus University.

He is a member of the Arab Administrative Development Organization (ARADO) in Cairo since 2001.

Governor of Homs in 2013. Married with a daughter. He was born in Damascus, 1955, he had a degree in  chemical Engineering from the Soviet Union in 1982 and he  is a member of the political Bureau of the Syrian Communist Party and a member of the Executive Office, Secretary of legislation and Legal Affairs in  General Federation of Trade Unions from 2002 to 2015.

He served as an adviser in the General Federation of Trade Unions, as well as a member of the leadership of the Damascus branch of the Progressive National Front and a member of an executive office of the Syrian Association of graduates of Russian and Soviet educational institutions. He was born in Tartous in 1956, He had a degree in commerce and Economics from Damascus University in 1984 and a diploma in educational qualification from Tishreen University in 2000.

A member of the executive office in the Tartous City Council, head of the General Secretariat of the Arab Democratic Union Party, and a board member of the Syrian Historical Scientific Society in Tartous. He was born in Hasaka in 1950, he is a member of the political Bureau of the Syrian Communist Party and a member of the People’s Assembly for the second legislative round.

He had a diploma in textile engineering and a master’s degree in technical sciences from the Moscow University  in 1983, and since 2000, he has been appointed as the general manager of the textile company in Hasaka.

Powered by sana | Designed by team to develop the software
© Copyright 2020, All Rights Reserved