Damascus, SANA- The plastic artist Farid Shanakan was influenced by the cultural and architectural feature of his city, Damascus, which is strongly present in his various artistic creations that represent the heritage of the Syrian city with all its details.

Speaking to SANA reporter, Shanakan said that the Old City in Damascus expresses all forms of art, from marble and stone sculptures, to the shape of the stones of pools and fountains, ceiling ornaments and inscriptions, and brickwork of alternating colors.

The artist, who had learned calligraphy and decorative patterns before he studied plastic arts academically, believes that studying art doesn’t create an artist, although it represents the first step, after which the art student has to follow their own path through painstaking experimentation and daily practice of art, to find out their strengths and address their weaknesses.

Shanakan said some of the artists who influenced him include late masters such as Fatih al-Mudarres and Nadhir Nab’a, in addition to Afif Bahnasi and Hassan Kamal who introduced him to Damascene and Andalusian heritage.

Shanakan stresses that the artist has to be distinct through their uniqueness and by making use of their rich cultural and traditional heritage, which is why he has employed Damascene heritage and integrated it into his works to create his own distinct style. 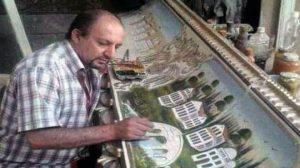 Farid Shanakan was born in Damascus in 1963 and graduated from Art Faculty in Damascus University in 1986. He specializes in Damascene decorative renovation, arabesque, and marble mosaics, and he participated in many art exhibitions in Syria and abroad.

Bogdanov, Haddad discuss the developments of the situation in Syria