Washington, SANA-In a letter to US President Donald Trump, members of the Syrian community in the US affirmed that Washington is committing a war crime against the Syrian people through imposing the sanctions and the so-called “Caesar Act”, adding that those measures are considered as a form of racism and they must be immediately lifted.

The letter was sent by Aziz Wehbe, President of the Syrian-American Society of Architecture on behalf of members of the Syrian community during a stand held Monday in Pennsylvania in protest against the sanctions. 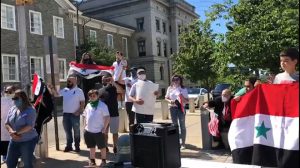 The letter read “We stand by our people in Syria who are facing the ugliest type of war which is the economic war led by the US government.”

The letter referred to tightening the measures on the Syrian people by the US occupation forces through looting their resources overtly and burning the wheat fields.

During a stand held Monday in front of the Federal Building in Allentown, members of the Syrian community in the Pennsylvania condemned the so-called “Caesar Act”, indicating that it is an economic war and one of the forms of political racism.

Bogdanov, Haddad discuss the developments of the situation in Syria